There is not a better way to kickstart your morning than having a great cup of coffee. But you must be getting bored with the same old Mocha or espresso, so have you ever thought of coffee that looks like beer but does not contain any alcohol?

We are sure you all have your favorites when it comes to the type of coffee, and if you are a coffee lover who loves to experiment with new flavors and brews, you have to try the Starbucks nitro cold brew coffee. 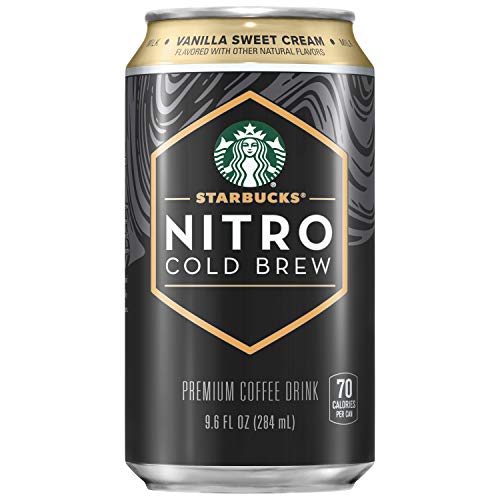 Now if you have never heard of cold brewing before, here is our guide to explain each aspect of this great coffee:

The story behind it:

Are you hearing about nitro cold brew coffee for the first time, well if so you may be eager to know the story behind its formation. The first nitro cold brew was made by a food scientist from Portland called Nate Armbrust. Nate was finding ways to make coffee tastier by changing the way it is brewed. Inspired by the beer brewing techniques which involve a fizz adding an element like carbon dioxide, Nate tried adding it to coffee, but that destroyed the flavor of the coffee. The coffee beans do not respond well to acid the way juices or tea do, so the formation of carbonic acid in coffee is not a good idea. So when Nate decided to add nitrogen and voila the nitro cold brew that we know today came into existence.

Nate got a good response from his initial tasters and decided to move ahead with his new idea. Today it has become very famous and is found all over the world infamous baristas like Starbucks.

What is it made up of?

Nitro cold brew has a rich, velvety smooth texture and contains less water than regular coffee. It contains nitrous oxide bubbles that give it the appearance of a beer. Nitrous oxide is a mixture of nitrogen and carbon dioxide in a ratio of 7 parts of nitrogen for 3 parts of carbon dioxide. This coffee does not contain any artificial sweeteners or sugar and is made up of coffee beans that have natural sweetness, if you have it without milk it rounds up to only 5 calories for a cup, isn’t that amazing?

How does it taste?

Well we know whenever you hear of a new drink the first thing you want to know is what it tastes like. Although taste is subjective, we can describe it for you as less bitter than your regular iced coffee or hot brew coffee. The process of cold brewing helps to give this coffee chocolatey undertones and make it less astringent. So if you like your coffee to be mild and smooth, this is the right coffee for you.

How is it served?

If you walk into a barista that serves nitro cold brew, you will be amused to see it getting poured straight out of the tap on the baristaâs countertop like an inhouse beer. The cold brew guzzles and forms bubbles giving you the appearance of a beer, and as it settles down, it gathers dense cream on its top. So it is a great way to start your day in a leisurely fashion without a buzz.

Generally, the nitro cold brew is served unsweetened to maximize the flavour that gets infused due to the cold brewing process, but it tastes best when served with sweet cream or vanilla cream.

As this coffee is very thick, it is not served with a straw. The best way to enjoy it is to sip in slowly enjoying its rich taste, you might end up with a foam mustache so have a tissue while you indulge in it. Although the cold brew can be enjoyed with or without ice, we recommend you to have it without ice. The ice may disturb the foam and dilute the richness of your coffee.

The portions are generally 10 ounces for a standard cup but are also available in 12 ounces and 16 ounces for larger portions.

What is cold brewing?

Even though it sounds like an iced coffee it is not the same. While iced coffee is brewed in just like normal hot coffee and then chilled, cold brew coffee is brewed at a way lower temperature. It normally takes 12 to 24 hours to cold brew the coffee, which is further stored under low temperatures and then mixed with nitrogen bubbles as it gets served. It is this process of brewing that alters the characteristics of traditional coffee and gives it a look and feel of the beer.

Cold brew coffee has a higher shelf life than regular coffee and hence is beneficial for retailers.

How much Caffeine does it have?

We tend to drink a lot of coffee throughout the day, so the pressing question will be how much caffeine does this coffee have? Well, as one can guess the process of cold brewing tends to extract less caffeine than hot brewing, but the long hours involved in making and the ratio of water to coffee beans totally change the game. Also the caffeine levels ten to be high if you are having it with ice, so be careful.

Typically a 16-ounce cup of cold brew has 280 mg of caffeine which is lesser than that of a hot brew for a similar volume. Nutritionists recommend that a 400 mg caffeine intake per day is safe and healthy, so go ahead and enjoy your cup!

How much does it cost?

Well, the name sounds fancy so one might think that this coffee would cost you a lot, but just like any other coffee, it is reasonably priced between $3.45 for short ounce to $4.45 for 16 ounces a cup.

Can you make it at home?

Well, we love trying to make our favorite things at home but unfortunately considering the low temperatures involved in the cold brewing process it is not possible to make this coffee at home.

If you are both a beer lover and a coffee lover, the nitro cold brew coffee is just made for you. So do not hesitate to try it out at your nearest barista, trust is once you try it out, there is no going back.

More from this Author

My name is Kathleen Baker. I'm a coffee lover, I love to try new coffee and explore the coffee culture. LeasCoffee.com is my personal blog where you can find everything about coffee. From buying to brewing, from roasting to the coffee world news, from various articles to reviews and ratings.