Cafe Bustelo is a filter coffee that tastes like an Espresso. The fact that it is a filter is due to the historic way that Cuban coffee was made and the fact that the cafe has been ground to a finer powder. It can be made with an Espresso machine but the recipe has to change. Cafe Bustelo is a product of its history and culture which I will look at quite early in the article.

Cafe Bustelo is a brand that was developed from Cuban and Puerto Rican influences. It has relocated to various places and has had more than one owner since it was created

The history of the brand tells the story of how the product developed into what it is today. Each step in the development of the company has added its own influence to Cafe Bustelo. We can see how each subsequent take over the culture of the coffee has changed.

Gregorio Menendez Bustelo was in reality born in Galicia, Spain (born June 21, 1894). During his youth, he relocated to Cuba then fell in love with Cuba’s rich, dark-roasted. This was Gregorio’s first connection with coffee. He later married a Cuban woman, who also loved the country’s coffee heritage, and they relocated to Puerto Rico.

Just after they got to Puerto Rico and the act was passed in the USA making Puerto Ricans into American citizens ( Jones-Shafroth Act).

The Bustelos took advantage of this and like many other Puerto Ricans, they moved to the USA. They located themselves in East Harlem (also known as Spanish Harlem or El Barrio).

This area was populated predominantly by Spanish language speaking immigrants, many of them Puerto Ricans. Finding work was not easy and the Bustelos invested their remaining savings in a Roasting machine. Their home was very close to a movie theatre and they would catch patrons coming out of the theatre and sell them coffee. In the daytime, they would sell their coffee to local restaurants in the daytime.

Their hard work paid off and in 1931 they managed to open their own store on 5th Avenue, located between 114th and 113th. So many Spanish speaking immigrants were coming to New York and the store was able to build a good trade. The business prospered and 1963 the brand was bought by Tetley, the British Tea Company.

Tetley added the brand to its portfolio of products and not much change was actually made to the brand. in 2000 the company sold it’s North American Espresso Division to Rowland Coffee Roasters.

The new owner of Bustelo’s was another family-owned business with Cuban roots, called Rowland. This company was run by the Souto family who was also of Cuban roots. They had been in the business since 1865 but had lost their original business.

They had also bought other companies. around the same time as Bustelos. They changed the direction of the marketing and instead of just aiming at the immigrant market they expanded their marketing to aim at young people, running promotions at music festivals. They believed that the sweeter roast of the Bustelo cafe would have a wide appeal with young people. This higher profile resulted in a further takeover by the J M Smucker company.

In 1897, Jerome Monroe Smucker founded a company selling cider and apple butter. The company diversified into jams and ice cream toppings, later peanut butter, and other food products. In 2008 they entered the business with the purchase of Folgers. In 2010 they strike a deal to market a range of pods, and then in 2011, they acquire Rowlands Roasters, owners of Cafe Bustelo and Cafe Pilon. In 2012 they took over the majority of Sara Lee’s Foodservice Coffee business.

With the takeover by Smucker the company has switched its marketing to highlight, once again, it’s Latin roots with adverts featuring Spanish music and language. 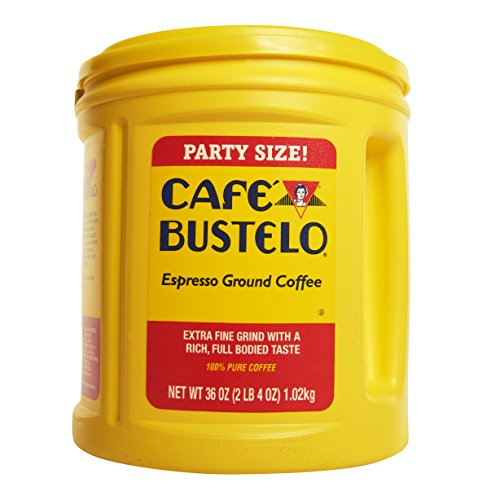 To finish, despite much of the advertising stressing the Latin nature of the product Bustelo is not really Cuban cafe. In the very early days, they would have used Cuban crops but since the revolution that has not been possible and the coffee sourced from other countries.

Bustelo is traditionally made with a filter and will result in a coffee that is strong as Espresso. You should use less in the filter process than you would other filter coffees. The suggested recipe is 6 ounces of cold water with every tablespoon of Bustelo. Of course, you may prefer to make the cafe with an Espresso machine, and many people do this but remember to add slightly less than you normally would.

More from this Author

My name is Kathleen Baker. I'm a coffee lover, I love to try new coffee and explore the coffee culture. LeasCoffee.com is my personal blog where you can find everything about coffee. From buying to brewing, from roasting to the coffee world news, from various articles to reviews and ratings.